MonsterLabo’s ‘The Beast’ is a high performance fanless chassis able to dissipate up to 400W of heat, thanks to two massive integrated heatsinks. This is the place to configure a complete AMD based system around this impressive chassis. 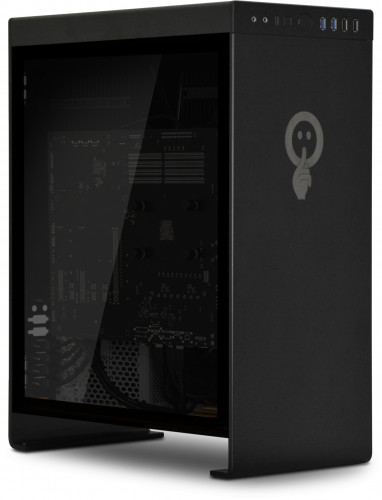 No doubt you’ve already had a look at the product page for ‘The Beast’. If not then we highly recommend you take a look because the below information is about configuring a complete system around this chassis, rather than highlighting the many benefits of ‘The Beast’.

The fact that you are look at the page tells us that you are in need for a high performance PC that is totally silent. ‘The Beast’ is just the case to allow this to happen, as it can accommodate a CPU up to 150W TDP and a graphics up to 250W TDP without the need for any fans whatsoever. And here at Quiet PC we are very interested in completely silent systems, especially those that can achieve high levels of performance. 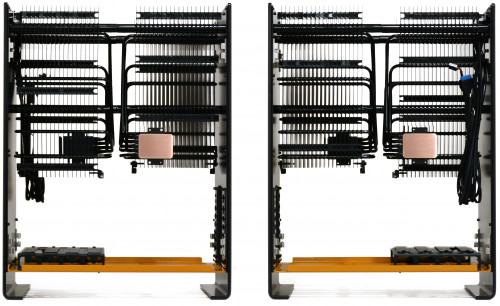 Unbuilt image of The Beast, showing the large heatsinks

At the heart of the ‘The Beast’ are two massive heatsinks, one for the CPU, while the other is for a graphics card. To maintain the limits of the CPU heatsink the below configurator shows a list of compatible AMD processors. The Ryzen 5 5600X is a 65W processor, while all the others are 105W. This means from a cooling point of view the Ryzen 5 is the easiest to cool. Even though the processors will exceed their stated base clock speeds and therefore consume more that the stated TDP all processors available are suitable. We’ve ran many test to determine their suitability. A pass for Quiet PC is where a processors does not throttle below its base speed at any point, no matter how hard the processor is stressed.

The second heatsink at the heart of ‘The Best’ is dedicated to the graphics card. This heatsink can dissipate a massive 250W without the need of any airflow. The list of cards in the configurator are all cards we currently have available that can be used with zero fans. In regards to what we would recommend, that all depends on what you require the graphics card for. If you need 4K outputs to drive multiple monitors then the main features would be the amount of ports the card has along with the DisplayPort and/or HDMI version. Alternatively if you are a gamer or intend to play the occasional game to wind down then you may want to opt for a more powerful card.

The range of graphics cards shown will consistently change depending on availability as well as compatibility.

As we are building this PC as a completely fanless system, we are unfortunately unable to provide this system with a graphics card above the Nvidia RTX 3070 or the AMD RX 6800. This is because the RTX 3070 Ti has a TDP of 290W and the AMD RX 6800 XT is 300W. Any other graphics card beyond those already mentioned will consume even more power. Yes, of course we could add a fan to aid cooling, but this is a fanless system and adding any moving part will no longer make it silent. 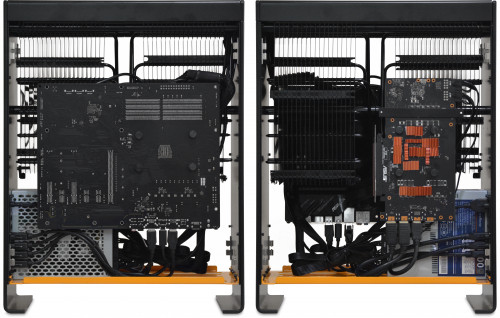 PLEASE NOTE: Due to how the motherboard is installed in the case, adding additional M.2 drives to the system is not an easy task. The motherboard would have to be completely removed from the heatsink. Therefore, we highly recommend you populate as many of the M.2 ports as possible at the time of configuring the PC. Adding a SSD is significantly easier. Adding one of these does not require any component to be removed from the system.

TDP = Thermal Design Power, the amount of power (measured in watts) consumed by a component. Please note, that the stated TDP of a processor is the base clock speed. If the clock speed exceed the base clock (due to Intel’s Turbo Boost or AMD’s Turbo Core) then the TDP will increase accordingly.

DisplayPort and HDMI - These are the main type of ports supplied on the back of a graphics card. Current versions are DisplayPort 1.4 and HDMI 2.0, both of these version are perfect for 4K high resolution monitors.

M.2 and SSDs - Although these drives are both solid state, there are two main difference between them. A M.2 drive connects directly onto the motherboard and therefore does not need data or power cables, which makes for a much tidier build. A SSD, does require these cables and is generally installed onto the chassis in some type of drive bay. Another benefit of a M.2 drive over a SSD is the read and write speeds. SSDs use SATA interface to connect to the motherboard, which is currently limited to a speed of 600 MB/s (Megabytes per second). A M.2 drive uses the PCI express interface through a NVMe driver and has a theoretical limit of 64 Gb/s (Gigabits per second), which is the same as 8000 MB/s. The configurator will show the read and write speed for all of the M.2 drives available for this system.