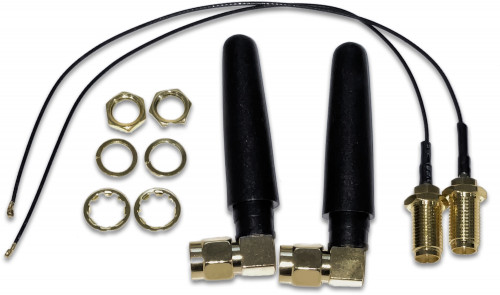 Akasa’s Fanless NUC Chassis is machined from aluminium and is therefore excellent at providing electromagnetic shielding to the NUC circuit board. As a side-effect of this, if the NUC is fitted with a wireless card, it is necessary to use external antennae in order to allow the radio signals to be reliably received and transmitted.

This antennae kit includes two custom SMA ‘pigtail’ cables which connect between the wireless card and the rear of the NUC chassis. In addition, two high-gain 5dB aerials are provided - one for Wi-Fi and one for Bluetooth. It doesn’t matter which pigtail or aerial is connected to which U.FL socket on the Mini PCIe card since Wi-Fi and Bluetooth both use similar radio frequency bands.

“Fast shipping from UK to US; very good quality and condition.”

“I like these M.2 PCIe 3.0 SSD’s so much I ordered a second one. I might order two more for software 4 drive RAID 0 setup. My motherboard will only boot from the embedded M.2 PCIe 2.0 x4 slot, and the PCIe 3.0 x4 cards with the SM951 installed only work after the system is booted. This is a problem with the motherboard, not the SSD’s. I ordered a XP941 to boot from in the motherboard’s M.2 slot. And the two SM951’s will be in software RAID 0 (windows 8.1). The SM951 SSD’s perform better than a 4 drive SSD PCIe 3.0 RAID adapter.”