The CNPS7000 series “Super Flower” has been a massive success for Zalman, but with processors becoming hotter and hotter it was only a matter of time before Zalman came up with something even better So say hello to the colossal CNPS7700 series!

The design is very similar to the CNPS7000 series but with one major difference. The CNPS7700 series uses a 120mm fan compared to the 92mm fan used with the CNPS7000 series. This provide a greater amount of airflow at lower fan RPM, which means better performance without any extra noise! 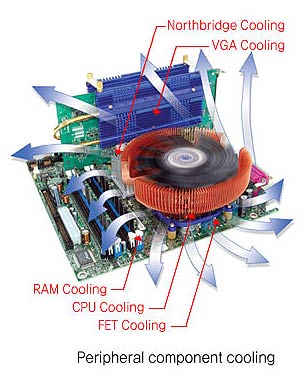 Another benefit of a 120mm fan is that the components around the CPU are also cooled. The image to the right shows the 120mm fan providing cooling to other sensitive areas around the vicinity of the CPU. Important components like the Northbridge chip, RAM, VGA and FET circuitry now receive a share of the airflow. The benefit of this airflow is that the expected life of the components receiving the airflow is increased because their operational temperature is reduced.

All of these factors makes the CNPS7700 series the best choice CPU cooler. But the size comes at a cost, see below for compatibility issues!

The specifications of the CNPS7700 series are identical, except that the thermal resistance is 0.02°C/W higher for the CU version. In practice this equates to a lower CPU running temperature of around 3°C for a high-end system. Most customers would not notice this difference in practice, and therefore we recommend purchase of the standard cooler (ALCU version) instead of this full copper (CU) version, since it is both lighter and less expensive.

Since the weight of the CU version exceeds Intel’s recommendation by a factor of two, we strongly suggest that you consider purchasing the ALCU version instead, which has outer fins made from aluminium in order to bring the weight down. Cooling performance is not significantly different. If you decide to go ahead and purchase the CU version because cooling performance and looks are the absolute priorities, then please be advised that installation is at your own risk. Neither we nor the manufacturer can be held responsible for any damage to a system or a CPU occurring when a PC is moved with an overweight heatsink in situ. UNDER NO CIRCUMSTANCES must a PC be transported by courier with this heatsink in place. The heatsink must be removed from the CPU before transporting the PC in order to prevent damage.

Due to the large diameter of the CNPS7700 there are a few things to consider before purchase. Zalman state that no motherboard components with a height greater that 39mm as well as the PSU, disk drives, VGA card, and RAM should be present within a 68mm (2.68 inch) radius from the center of the CPU.

PLEASE NOTE: Your motherboard may need to be removed from the chassis to be able to install the CNPS7700.

PLEASE NOTE: Some motherboards have difficulty measuring low fan RPM speeds on coolers such as this one. The problem can sometimes be fixed by updating the motherboard BIOS to the latest version available on the motherboard manufacturer’s website. However, with some motherboards, the problem remains. Regardless, this will not affect performance. In addition, some motherboards will not boot if the CPU fan speed cannot be measured, as a safety feature. After rotating the Fan Mate speed control fully clockwise to enable booting, this feature needs to be disabled in the BIOS setup (set “CPU Fan Detect” or similar to “Disabled”).

“Great, no issues. Ordering process smooth and efficient. PC well built and as per spec. Would order again.

This review website on the other hand is pretty bad (needs optimising for mobile).”