The ASUS PCE-AX3000 is an easy way to upgrade or add super-fast next-generation Wi-Fi 6 to any desktop PC. 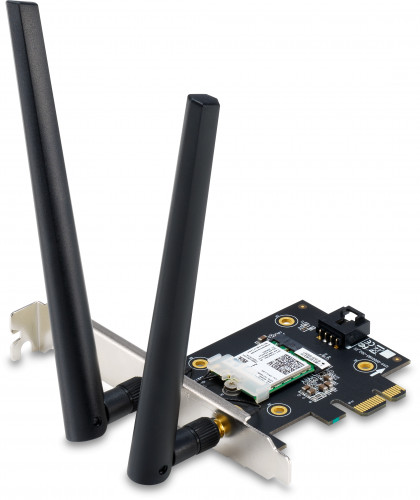 With WiFi 6 (802.11ax) technology and wide 160 MHz bandwidth, ASUS PCE-AX3000 delivers wireless speeds that are up to 2.7X faster than WiFi 5 (802.11ac) devices. A revolutionary combination of OFDMA and MU-MIMO technologies ensures the most efficient WiFi connection for your PC.

Still Fast, Even In Crowded Network

Slot ASUS PCE-AX3000 into your PC for an instant upgrade to the latest Bluetooth 5.0 technology. You’ll benefit from the convenience of wireless connectivity with a wide range of devices, including speakers, headphones and game controllers, plus transmission speeds that are up to 2X faster – and with up to 4X-greater range.

ASUS PCE-AX3000 comes with the latest WPA3 Wi-Fi security standard, providing your PC with an extra layer of protection against external attacks to give you added peace of mind.

“PC arrived slightly later than scheduled, probably due to a local holiday and was taken to the local post office rather than being left with a neighbour as most often the case with DHL -- a little irritating for such a large parcel.

This, of course, has nothing to do with Quiet PC. The computer itself has performed flawlessly in the ten days I have had it and a couple of queries I had were promptly and helpfully answered and I was kept updated at all times with progress of the order. I did have an issue with an external soundcard which caused interference to a much greater extent than with the old computer but I’m aware that these things happen and I was able to buy an effective line isolation box which ensured that my first ever totally silent PC remained that way.”