Standing just 64mm tall, the Shuriken is ideal for PCs where space is at a premium.

If you are a fan of old Ninja movies then you might know what a Shuriken actually is. If not, it is a metal star-shaped object more commonly known as a “death star”, “ninja star” or even “throwing star”. Ninjas use them as a weapon that they can conceal in their clothing and then throw toward their enemies to inflict as much pain as possible! In the movies, the goodies always seem to hit the baddies directly between the eyes: at least it was a quick death!

As to why Scythe have decided to name their latest CPU cooler Shuriken is anyone’s guess! It might be because of the cutting-edge (sorry!) performance it provides, or perhaps because Scythe are running out of Japanese names to call their products. Whatever the reasons are, no doubt Scythe will continue to provide us with some of the strangest names for CPU coolers ever conceived!

The Scythe Shuriken is essentially a smaller version of the Zipang. Measuring only 64mm in height, this cooler should have no problems fitting inside a low profile or media centre chassis. It uses three heatpipes which have been bent into an oval shape. The heat generated by the CPU feeds through both sides of the heatpipes and is transferred into the large aluminium fins. The heatpipes are soldered to the underside of the large heatsink which helps to reduce the cooler’s overall height.

Mounted on the top of the large aluminium heatsink is an oddly-sized 100mm PWM fan. The PWM function allows the motherboard to control the fan’s RPM based on the temperature of the CPU. This means that if things start to heat up then the fan speed will increase to compensate for the additional heat. Another odd feature about the fan is that it is only 12mm thick: another height-saving feature. 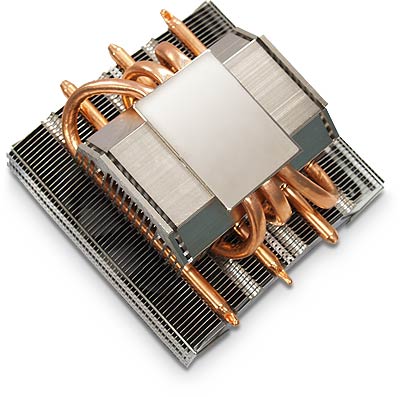 The Shuriken has been designed to provide compatibility with the most common desktop motherboards. Intel’s socket 478, LGA775 and AMD’s socket 754, 939, 940 and AM2 platforms are all supported. The new RevB version increases compatibility even further, Intel’s LGA1366, LGA1155/6 and AMD’s AM2+ and AM3 sockets are now all covered!

In summary, if you require a CPU cooler that has the credentials to perform but your choices are restricted from a space point of view then the Scythe Shuriken could be just what you are looking for.

I ordered this for my CoolerMaster/Gigabyte UD5/i7 box. The system visualizer shows a 10-15’C drop in operating temperature with nothing above 59’C. And just now I had to check it was on as I automatically went for the power-on button. And that’s after adding a Noctua NF-R8 REDUX fan to sit over the graphics cards. Awesome stuff. Simon

So far, awesomeness all the way

Early days yet, as the cooler has been fitted for less than a week, but the quietness is amazing. The fan it replaced was not much quieter than a Boeing 747 spooling up all engines prior to take-off. Now I can’t even tell if the machine is on or off unless I look at it to see if the power light is on.

Fitting the cooler on a Socket 478 chip was a doddle (if a bit tight thanks to my chubby fingers) and the alternative fittings for other processor types look similarly well designed and finished. Oh and, to save you emailing customer services to ask, there is a small packet of thermal paste included in the box too.

We’ll see how it performs over the summer months but to date the processor temp has barely been above the board temp.

It just fits into my old ASUS Barbone. No margin, but it fits. Very easy to install on the 478 socket, no need to remove the motherboard. And very quiet. I bought it for an audiophile PC, and yes, it is quiet enough. I now need to work on the power supply.

My HTPC is definitely quieter since installing this CPU cooler but installation was fiddly and took longer than I thought it would due to the position of the “pins” (which are situated under the radiator) making it difficult to get downward pressure on them in order to “pop” the clips into the mobo. Having said that, I think it offers good value for money.

Size is not everything

This is a sweet little low profile heatsink with fan and it was simple to fit (ok, the lga775 push fit system is never pleasant) but once in it works and is beautifully quiet where fan controlled. On full speed the rpm is high but I found it whined too much, and as it only sits in a server case the fan speed has been halved. For my purposes a high score but if you need to cool a high end CPU in a hardcore system it may not be for you.

Bit of tweaking required for some ASUS motherboards

The stock 100mm PWM fan that comes with this cooler spins from 650-2200rpm but 650rpm is too low as an initial speed for some ASUS motherboards and you may receive a CPU fan error (false alert really) - only applicable when using quiet CPU fan settings…which you will be if you want to keep your PC quiet.

You have three choices:

Don’t be concerned about the 8mm difference in size - the brackets that secure the fan to the CPU cooler use 92mm fixings, hence the two holes on the fan included.

I bought this for my Batman Themed, Core i3 HTPC. It is completely silent. Running on stock speeds while idle (3.06Ghz), coretemp shows it hangs around 20 Degrees C! When watching vids etc i’ve never seen it go about 28. Fantastic! My stock Core i5 with a Zalman cooler runs at 38 (for some reason). This Shuriken kicks serious butt!

I wanted to replace my stock Intel cooler as it was noisy and temps were 45 degrees + idle. Brought my temps down 10 degrees and much quieter. It spins At 1200 rpm most the time. The 775 fitting was easy to fit to the cooler however it was a little difficult to install as I never took out my motherboard or case fans.

On the whole a low profile quiet cpu cooler that is better and quieter than stock cpu cooler at cooling an overclocked cpu. Fitting is very easy with the push down pins as long as you don’t have any large fans/heatsinks around the cpu area.

This is an excellent CPU cooler, it is really quiet and performs very well in my Dell Vostro. It is quite difficult to install the push pins though.

Quiet but not great performance

I bought this for a HTPC the obvious benefit being the height. It is running on an AMD X2 6000+.

On the plus side it is quiet even under high load. The downside is the performance which I found to be less than the stock AMD cooler.

Testing under load and using “Core Temp” to report on temperature showed one Core could be up to 10C higher than the other.

This may be down to the clip design which again is not brilliant and requires a bit of fiddling to get even pressure across the processor. I think if you were using it on an Intel cooler you wouldn’t have this issue.

Sorry to hear the performance was not as good as you hoped it would be. It seems that your processor generates a massive 125 watts of heat, and actually we wouldn’t recommend the Shuriken for processors above 95 watts.

It might be better if you use a Ninja II instead of a Shuriken, which will be much more up to the job of cooling your Athlon 64 X2 6000+, or if you need a smaller cooler for a low-profile case, etc., we would recommend the Mini Ninja.

Please remember we offer lifetime technical support for any product purchased from Quiet PC, and will happily refund or exchange any product within 30 days under our standard terms of sale so please get in touch if you would like to.

This is the best cooler I’ve ever bought! It’s REALLY quiet. Cools my 95W AMD X3 Triple Core CPU perfectly in my HTPC Case (Thermaltake Mozart SX VC7001SNS) which is only 9CM high! Having limited space in an HTPC case makes cooling a beefy CPU tricky but this cooler does it well, and quietly!

The clips that connect to it are a doddle to install, and the cooler uses the standard motherboard mounting clips unlike other CPU coolers which require you to use a different plate behind the motherboard.

Before I got this cooler I purchased an Arctic 64 LP cooler and it sounds like a tornado compared to this, now I can watch blu-ray, hd-dvd movies and sleep (though not at the same time, lol) without being disturbed and annoyed by any CPU fan noise.

If you don’t need a low profile cooler then don’t buy it, but if you need a good, efficient and above all quiet cpu cooler then buy it without hesitation.

I highly recommend it.

Good and efficient service. Also quality items. Would have no issues with ordering again or recommending.
(Review via Trustpilot)