A top-performing and more affordable version of the 850 PRO series drives, the 850 EVO SSDs are a great solution for an unbeatable combination of price, speed and capacity.

If you’re looking for the next great innovation in SSD performance and worry-free reliability, look no further than the Samsung SSD 850 EVO. Boasting the world’s first 3D Vertical-NAND (V-NAND) SSD, the 850 EVO brings professional-calibre computing to the end consumer, delivering optimised performance for everyday use. 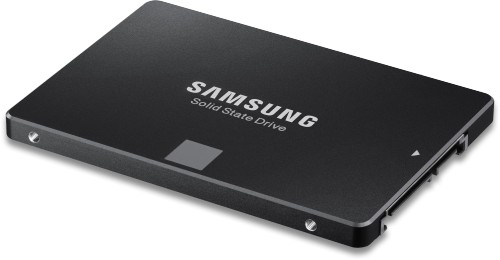 Opt for an SSD: The smart choice for your PC

Why choose a solid state drive (SSD) over the good old hard disk drive (HDD) that you have been using for so long? The answer is simple: an SSD is a better choice than a HDD in many aspects. Unlike HDDs which comprise of a disk and physically moving heads, the 850 EVO is a storage device that uses semiconductor memory such as NAND flash. So SSDs offer faster read and write speeds and lower power consumption with virtually no noise. An SSD is the smart choice for users who want to power up their PCs with greater performance and higher reliability. So, it’s time you said goodbye to your old HDD and welcome your PC’s brand new enhancement.

After making the smart choice of choosing an SSD over an HDD for a multitude of benefits, the next question is deciding which SSD is right for you. As a world leader in technology, Samsung offers SSDs that boast superior performance. Combining the finest hardware components and easy-to-use solutions, a Samsung SSD gives you the all-in-one solution and top-notch performance you want. With a Samsung SSD, your PC carries out commands so quickly that you will have more time for work or play, or to enjoy with your family.

The Samsung SSD is the single Best Upgrade for your PC

The easiest and most economical way to breathe new life into an existing system is to upgrade to an SSD. When boot-up speeds and application loads are slow, people become frustrated with their PCs` performance. Today, most PC performance woes are the result of slow read and write speeds on the main storage device (the HDD) rather than a lack of CPU performance. Thus, upgrading to a Samsung SSD can breathe new life into your system by enhancing boot-up speed, application loading, and multi-tasking performance.

What is 3D V-NAND and how does it differ from existing technology?

Samsung’s unique and innovative 3D V-NAND flash memory architecture is a breakthrough in overcoming the density limitations, performance and endurance of today’s conventional planar NAND architecture. 3D V-NAND is fabricated by stacking 32 cell layers vertically over one another rather than decreasing the cells dimensions and trying to fit itself onto a fixed horizontal space resulting in higher density and better performance utilising a smaller footprint.

Achieve the ultimate read/write performance to maximise your everyday computing experience with Samsung’s TurboWrite technology. You not only obtain more than a 10% better user experience than 840 EVO* but up to 1.9 times faster random write speeds for 120/250 GB models** as well. The 850 EVO delivers the top of its class performance in sequential read (540MB/s) and write (520MB/s) speeds. Plus, you also gain optimised random performance in all QD for client PC usage scenario.

“Tired of buying cheap graphics card cooling fans which only last a couple of months I contacted Quietpc. Andy was very helpful identifying something that might do the job and when I ordered one it arrived the next day. All this service for a £8 fan! Fan is quietly doing the job at the moment, Now it is a case of seeing if it will last - but at least it has a 2 year guaranttee!”