This next-generation fanless CPU cooler uses IcePipe technology - no fans, no dust, no noise. It is capable of silently cooling almost any modern processor with a TDP (thermal design power) output of up to 95 watts. 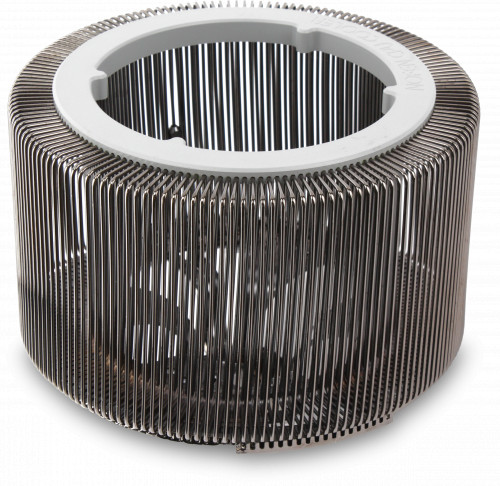 Probably the biggest technical advancement of the last decade in the field of PC cooling has been the invention of the thermal heatpipe. This has allowed a much greater efficiency of heatsink to be designed since heatpipes are good at moving heat from one location to another, both quickly and silently.

However, the performance of heatpipes has been limited by their internal design, which relies on cyclic evaporation and condensation of the water inside them. That is until now! The next generation heatpipe has arrived - it’s smaller, lighter, wickless and offers a massive improvement in performance. Its design is patented by Nofan Corporation of South Korea, and it’s called the IcePipe.

The holy grail of quiet computing is excellent cooling without resorting to the use of a fan. Rather than using forced airflow along with its associated problems (noise, dust-build up, bearing wear and limited lifespan), convection cooling is undoubtedly the technology of the future and because of the IcePipe, this is now a realistic possibility.

The exact details of how the IcePipe works are a trade secret, but in essence it operates by liquid capillary action. By making the pipe very small, natural perpetual circulation of the liquid inside takes place and heat is efficiently dissipated into the attached heatsink fins. Of course, like conventional heatpipes, the IcePipes are permanently sealed in the factory so that no liquid can ever escape.

The CR-95C is Nofan’s flagship CPU cooler and replaces the CR-100A which was a slightly larger first-generation version. Because the CR-95C is physically a little smaller, it has much improved compatibility because of reduced interference with other motherboard components. It is certainly a thing of great beauty and if you happen to have a side-window in your PC, a definite talking point!

The primary consideration with the CR-95C (like all CPU coolers) is its ability to cool hot-running processors. The heat generated by a CPU is defined by its TDP (thermal design power) and is measured in watts. Newer processors tend to run cooler than previous generation models, although there will always be a trade-off between speed and heat. The CR-95C can continuously and silently cool any processor with a TDP specification of 95 watts and under, which includes the majority of processors on the market today - even high performance ones.

Fitting this cooler was fairly self explanatory but due to the size of the cooler it was fairly fiddly to fit. Other than this the cooler looks fantastic and has been doing a great job cooling my computer. With normal workloads I don’t even need any case fans running to keep the CPU at reasonable temps. Whilst torture testing the CPU with Prime 95 the CPU temp did get up to 85 Celsius after 15 mins. Whilst it’s unlikely someone will be running loads like this with normal use, just to be on the safe side I would add some case fans that will come on as temps get too hot. With just 2 120mm case fans running, the CPU temperature reached a consistent 70-ish Celsius whilst running Prime 95 in the hottest settings.

Surprised just how cool this is keeping my 6 core AMD FX 6100. Thing I didn’t appreciate was how much my old CPU cooler was cooling other components, so two of the heat sensors are now reading 50 degrees most of the time. Will probably need to fit another case fan for summer. One thing that has amazed me is how quickly the CPU cools after the load drops.

Delivers, what it promises!

After many years, using some sort of rotating fans/coolers in various PC parts, I decided to go completely fanless and bought this CR-95C Copper cooler along with Nofan CS-80 case. So far, after few weeks of use, experience for both products are great. This CR-95C Copper fanless cooler really delivers what it promises. For my setup I used these (carefully chosen) parts:

When my system is in idle/low activity, temperatures (measured using AIDA 64 extreme) in my case are following:

Of course I do not know yet, how this setup will perform in summer time, when temperatures in room might reach 30-40C, but I’m sure it will be just fine.

Loving fanless setup from minute I turned PC ON for first time, it just felt so natural, don’t know how I could cope with noise for all these years. For me “silent fan” or “barely audible fan” does not suffice any more. I want 0db noise. And CR-95C Copper gives you exactly that!

Worth mentioning is that this cooler is BIG. It will probably block use of first PCI-E x16 slot in your mobo. For Gigabyte GA-Z97X-UD5H which I used, it does not cover it, but its quite close, so I don’t know will it be possible to use dedicated videocard in pci-e x16 slot, but I was expecting this and so far I use built-in intel onboard graphics of cpu which are fine for my needs.

Other thing worth mentioning is that mounting this cooler on Intel cpu systems will require some patience due to fact that holes on cooler for bolting it to motherboard is not round (perhaps its done for better compatibility), you will understand this if you mount this cooler yourself. For me it took probably 20-30minutes to set it up.

Even better than I imagined

My CPU idles around the 35 degrees in a fully passive enviroment (albeit no dedicated GPU). Mounting was rather difficult, but this is a solid product.

I use an i7 Haswell processor for running protools audio software and Reason (often at the same time). In use for recording, mixing down and synthesising using multiple software instruments and many tracks I haven’t seen the temperature get above 54C. Stress testing using Prime95 at its most extreme setting it varied between 77 - 82 C. Stopping the stress test saw an almost immediate fall to 60 and after a few minutes back to idle at about 40 C.

What can I say really? A real step forward especially if you are running recording software…

Does the job, keeps Intel i7-4770K CPU temperature below 95 C. This may seem too steep, but what’s really important it prevents temperature hitting the Tj_max, at 100% all 4-core load. Air vents on the top side of the computer case are a must!

Silent - but make sure you meet the pre-requisites

Easy to install, but make sure your RAM doesn’t exceed maximum height and that you have a case with vents in the top as required. Also note this will occlude the first PCI express slot on certain motherboards - especially mATX and fully loaded ATX motherboards with lots of slots. I was amazed at the sis of this thing and how much heat it puts out. On my core i7-3770 a 77w regular clocked processor the CPU temps come in at around 93c under load when using system stability tester - the Tj max temp for this proc is 105 - this seems to be a bit close. I forgot to see temp on stock fan so cannot compare sorry.