Introducing the third generation of the Mugen CPU cooler from Scythe which now features greater performance and easier installation compared to the Mugen 2.

The third version of Mugen provides higher compatibility, a more compactly designed fin arrangement and a better thought out backplate. The total cooling performance has been increased by refining the M.A.P.S. (Multiple Airflow Pass-through Structure). The Mugen 3 comes with a very quiet “Slip Stream” PWM fan for minimising the noise level at low load as well as maintaining cooling performance at heavy load. 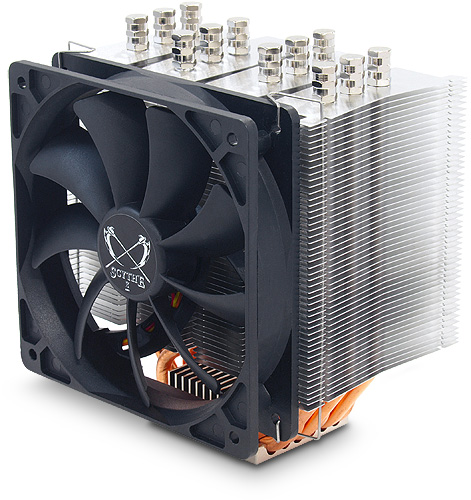 The fan motor applied is a Slipstream PWM 120 x 120 x 25mm small axis large fan blade model, which minimises the noise at low load, as well as maximising the performance of Mugen 3 during heavy load periods. The fan runs at a minimum speed of around 300 RPM up to 1600 RPM, generating air flow from 14.7 to 88.1 CFM and noise levels of 9.6 ~ 32.15 dBA respectively. The overall cooling has been carefully designed to meet Scythe’s Wide Range Cooling Purposes philosophy, providing high level performance for both users who require a very quiet cooler or users who want maximum performance.

By introducing the newly refined M.A.P.S. (Multiple Airflow Pass-through Structure) the total cooling performance has been upgraded by optimising the pass-through function of the airflow and enhancement of the sturdiness of the heatsink.

What a great service

What a great service and exceptionally quiet fans. I have no hesitation recommending Quiet PC to anyone.
(Review via Trustpilot)