This high-end motherboard takes the latest 2011-3 processors for outstanding performance designed to chew through gruelling workloads. It can take up to 128GB using DDR4 memory modules and requires a minimum of one video card. 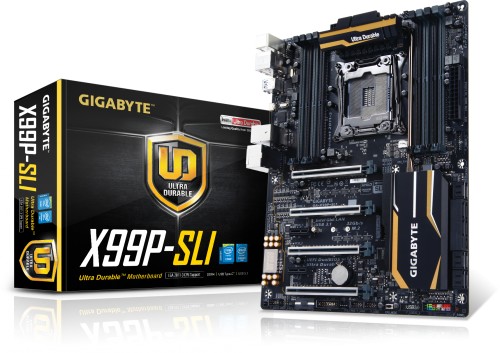 The GIGABYTE X99P-SLI motherboard is the world’s first X99 motherboard to be certified to support Thunderbolt 3. This gives enthusiasts that need the tried-and-true horsepower and reliability of the X99 chipset access to the world’s fastest connectivity protocol. Powered by Intel’s own Thunderbolt 3 controller, the new Thunderbolt 3 protocol is available over a USB Type-C connector on the back I/O of select GIGABYTE motherboards including the X99P-SLI. Bringing an unprecedented single-wire bandwidth of up to 40 Gb/s - twice more than the previous generation!

Support for DisplayPort 1.2 makes Thunderbolt™ 3 a must have for any enthusiast. The X99P-SLI is able to support a display in 4K resolution at 60 FPS. In addition, Thunderbolt™ 3 over USB Type-C™ has revolutionary industry-first features such as Power Delivery 2.0, and the ability to daisy-chain up to 6 devices thanks to the X99P-SLI’s USB Type-C™ port.

The Intel® USB 3.1 controller utilises 4 PCIe Gen3 lanes, offering up to 32 Gb/s total bandwidth, for uncompromising transfer speeds of up to 10 Gb/s per USB 3.1. With twice the bandwidth compared to its previous generation, and backwards compatibility with USB 2.0 and 3.0, the much improved USB 3.1 protocol is available over the new reversible USB Type-C and the traditional USB Standard-A connector for better compatibility over a wider range of devices.

The USB Type-C™ is a new reversible connector that is loaded with useful features such as USB 3.1 support for 10 Gb/s transfer speed and DisplayPort 1.2 support to connect 4K monitors. Powered by the Intel® controller, this little port is the better USB Type-C™. 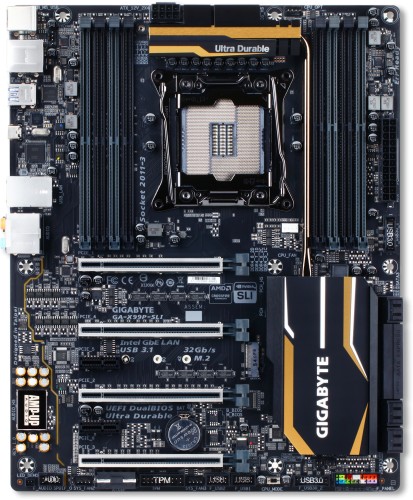 DDR4 memory modules are available at a stock frequency of 2133MHz, but memory vendors encode XMP profiles which can automatically modify the frequency and timings of the supported memory modules to work in par with your CPU. With the X99 Champion Series, GIGABYTE is offering a tested and proven platform that ensures proper compatibility with profiles up to 3333MHz.