The Asus Strix 750 Ti graphics card features exclusive DirectCU II and 0dB fan technologies and is able to boosts game speed by up to 7.7%, and stays 58% cooler and 3X quieter than the reference cooler.

The Strix GTX 750 Ti OC ia a new graphics cards powered by the NVIDIA GeForce GTX 750 Ti graphics-processing unit (GPU) and designed for players who like to game on the edge of instinct. 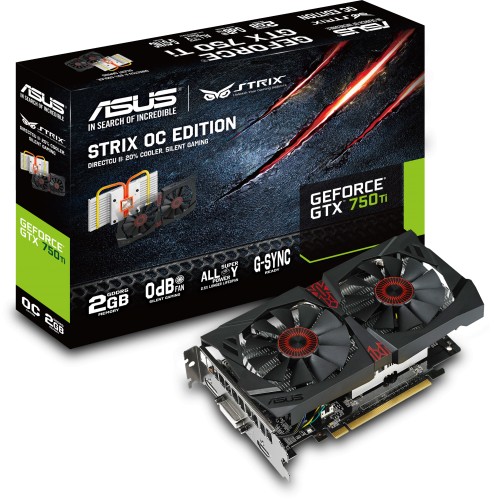 When playing at high-definition (HD) resolutions of up to 1920 x 1080 pixels, and in environmental temperatures of up to 50°C, the Strix GTX 750 Ti OC automatically stop its fan. It is only when the GPU reaches 65°C do the fans start to provide airflow. See the video below for more information.

Strix GTX 750 Ti OC is built with Super Alloy Power components for enhanced durability and cooling. Solid-state capacitors, concrete-core chokes and hardened MOSFETs are all designed to withstand much greater stress thanks to the application of specially-formulated materials. Super Alloy Power technology also reduces power noise such as buzzing and increases a graphics card’s longevity by up to two-and-a-half times (2.5X) greater than reference.

Strix GTX 750 Ti OC also includes GPU Tweak, an ASUS-exclusive tool that enables users to control GPU speeds, voltages and video-memory clock speeds in real time — so overclocking is both easy and can be carried out with high confidence.

GPU Tweak’s built-in streaming tool lets users share on-screen action over the internet in real time, meaning others can watch live as games are played. It’s even possible to add a title to the streaming window along with scrolling text, pictures and webcam images.

“I ordered two cases from the Quiet PC website, I was kept updated at every point in the despatch process, which was prompt and efficient.

The cases turned up, on time, in great condition.