Windows 8 features the new ‘Modern’ tile-based User Interface, as well as many enhancements to the familiar Windows 7-style desktop. Available in Standard and Professional editions, this is undoubtedly Microsoft’s best OS yet. 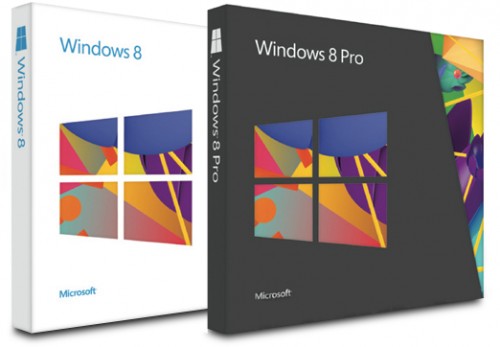 Microsoft’s latest operating systems promises to deliver the best PC user experience yet. In the three years since Windows 7 was launched, Microsoft have been working hard to deliver the next generation user experience and are now offering the final result at special introductory pricing as never seen before.

Unlike Windows 7, Microsoft is selling Windows 8 only in one edition, called “System Builder”. This replaces the OEM and Retail variants in which previous Windows versions came. The main problem with previous Windows OEM (original equipment manufacturer) versions was that once installed, they could not be legally transferred to a different PC later in the event of a hardware upgrade. However, this is not the case with the System Builder edition which can indeed be transferred to a different machine as and when required, as long as it is used only on one PC at any one time.

The standard version of Windows 8, (known simply as “Windows 8”, or sometimes “Windows 8 Core”) offers tremendous value for money and includes many enhancements and features over and above Windows 7 Home Premium. Although the biggest new feature in Windows 8 is the touchscreen-oriented ‘Modern UI’ (previously codenamed Metro), there are many major improvements and new features on offer to users of conventional PCs too, whom will most likely want to continue to use the traditional Windows user interface.

The Professional version of Windows 8 offers a few extra features which will be of interest mainly to business and enthusiast users, such as BitLocker® drive encryption, the ability to control your PC remotely using Remote Desktop and support for corporate network domain environments.

New features for both versions

Both standard and Professional editions of Windows 8 include numerous new features and improvements and the main ones are outlined below.

Windows 8 features a new lock screen which includes a date and time display, along with the ability to display notifications from apps. Two new login methods optimised for touch screens are also available, including a four-digit PIN, or a “picture password”; which users allow the use of certain gestures performed on a selected picture to login. These gestures will take into account the shape, the start and end points, as well as the directionality. However, the shapes and gestures are limited to tapping and tracing a line or circle. Microsoft found that limiting the gestures improved the speed of sign-ins by three times compared to allowing freeform methods. Wrong gestures will always deny a login, and it will lock out the PC after five unsuccessful attempts, until a text password is provided.

User accounts can be linked to a Microsoft account to provide additional functionality, such as the synchronisation of user data and integration with other Microsoft services such as Xbox Live (for gaming and multimedia) and SkyDrive online storage.

Windows Explorer, which has been renamed File Explorer, now incorporates a ribbon toolbar, designed to bring forward the most commonly used commands for easy access. The “Up” button (which advances the user back a level in the folder hierarchy) that was removed from Explorer after Windows XP has also been restored. Additionally, File Explorer features a redesigned preview pane that takes advantage of widescreen layouts. File Explorer also provides a built-in function for mounting ISO, IMG, and VHD files as virtual drives.

Windows 8 ships with Internet Explorer 10, which can run as either a desktop program (where it operates similarly to Internet Explorer 9), or as an app with a new full-screen interface optimised for use on touchscreens. Internet Explorer 10 also contains an integrated version of Flash Player, which will be available in full on the desktop, and in a limited form within the Modern UI app.

Windows 8 includes an overhauled version of Windows Task Manager where the tabs are hidden by default and only applications are shown in this view. Resource utilisation in the Processes tab is shown using a heat map, with darker shades of yellow representing heavier use. The Performance tab is split into CPU, memory, disk, Ethernet, and wireless network (if applicable) sections. There are overall graphs for each, and clicking on one reaches details for that particular resource. The CPU tab no longer displays individual graphs for every logical processor on the system by default. It now can show data for each NUMA node

The CPU tab now displays simple percentages on heat-mapping tiles to display utilisation for systems with many (64 or more, up to 640) logical processors. The colour used for these heat maps is blue, with darker colour again indicating heavier utilisation Hovering the cursor over any logical processor’s data now shows the NUMA node of that processor and its ID. A new Startup tab has been added that lists startup applications and their impact on boot time. The Processes tab now lists application names, application status, and overall usage data for CPU, memory, hard disk, and network resources for each process. The normal process information found in the older Task Manager can be found in the new Details tab.

Family Safety will no longer be separate installed via Windows Live; it will allow Administrators to monitor and restrict user activity via web filtering, application restriction, and computer usage time limits.

File History, a function similar to Mac OS X’s Time Machine, replaces the “Previous Versions” and Backup and Restore features on Windows 8. File History automatically creates incremental backups of files stored in Libraries and user-specified folders to an external storage device (such as a secondary hard drive, Storage Space, or network share). Users can then track and restore specific revisions of files using the “History” functions in File Explorer. Unlike Shadow Copy, which performs block level tracking of files, File History only utilises the USN Journal to track changes, and simply copies previous versions of files to the backup location.

A new installer known as the Upgrade Assistant is offered, which is intended to provide a simpler installation process for those who are upgrading to Windows 8. Upgrade Assistant integrates compatibility checks, assists in the transfer of files and settings, downloads the operating system for those who have purchased it online, allows the user to generate installation media, and also performs the installation. Steps were also taken to ensure the new installer performs upgrades faster than previous versions of Windows as well.

Windows 8 defaults to a “hybrid boot” mode; when the operating system is shut down, it hibernates the kernel, allowing for a faster boot on the subsequent startup. This is further compounded with support for multiple cores during bootup. On compatible systems, a manufacturer’s splash can now be maintained on-screen following the Power-on self-test, allowing for a seamless transition between control from the firmware to Windows. As the increased boot speed of devices with UEFI can make it difficult to access these functions using keyboard shortcuts, the Advanced Startup menu can now also be launched from within Windows using either the PC Settings app, holding down Shift while clicking the Restart button, or by using the new “-o” switch on shutdown.exe.

Windows 8 can now detect when a system is experiencing issues that have been preventing the system from functioning correctly, and automatically launch the Advanced Startup menu to access diagnostic and repair functions. Windows 8 also adds Refresh and Reset options, which allow a user to re-install Windows without needing to use installation media; both of these options reboot the system into the Windows Recovery Environment to perform the requested operation. Refresh preserves user profiles, settings, and apps, while Reset reformats the system partition and re-installs the operating system entirely. The reset function may also perform specialised disk wiping procedures for added security. Both operations will remove all installed desktop applications from the system. Users can also create a custom disk image for use with Refresh and Reset.

Windows 8 ships with an updated version of Windows Defender. Now based on Microsoft Security Essentials, it adds virus protection capabilities to the software alongside malware protection. Windows Defender will automatically disable itself if it detects that third-party security software has been installed, and is designed to only remain active only if no antivirus software is currently installed, or it detects that an antivirus program’s subscription has expired.

Windows 8 also supports the secure boot mechanism on supported UEFI systems. It uses a public-key infrastructure process to verify the integrity of the Windows boot loader, preventing malware from infecting the system before the operating system loads.

Previously offered only in Windows Server, Hyper-V, a native hypervisor is now included in Windows 8 Pro, replacing Windows Virtual PC, a hosted hypervisor. Windows 8 offers a new VHD format, called .vhdx, which supports up to 16 terabytes of storage. It has built-in resiliency as well as protection from corruption that can happen during power failures. It also helps prevent performance degradation on some large-sector physical disks.

Storage Spaces is a storage virtualisation technology which succeeds Logical Disk Manager and allows the organisation of physical disks into logical volumes similar to Logical Volume Manager (Linux), RAID1 or RAID5, but at a higher abstraction level. A storage space behaves like a physical disk to the user, with thin provisioning of available disk space. The spaces are organised within a storage pool, i.e. a collection of physical disks, that can span multiple disks of different sizes, performance or technology (USB, SATA, SAS). The process of adding new disks or replacing failed or older disks is fully automatic, but can be controlled with PowerShell commands. The same storage pool can host multiple storage spaces. Storage Spaces have built-in resiliency from disk failures, which is achieved by either disk mirroring or striping with parity across the physical disks. Each storage pool on the ReFS filesystem is limited to 4 PB (4096 TB), but there are no limits on the total number of storage pools or the number of storage spaces within a pool.