This high-specification beautiful PC comes in a choice of silver or black and is ready to go. It has no fans for zero noise, zero dust and zero maintenance.

Beauty and power in your living room

We are pleased to announce yet another ground-breaking example of living room PC design - the FC5 Fanless Media PC. Only 60mm high and 325mm wide, it is sure to look great as the focus of any home entertainment system. The machine is supplied in a shot-blasted finish and its fascia is clean, elegant and uncluttered. Only the power button, power light, optical slot and remote control sensor (option) are visible on the front of the case.

The PC itself doesn’t compromise on performance, and can be built pre-installed with up to 32 gigabytes of memory. Although Microsoft Windows will run happily on 2GB of memory, we recommend a minimum of 4GB to ensure that the machine has plenty to spare and will always offer excellent responsiveness whilst running PVR software such as Media Center which comes free with Windows. 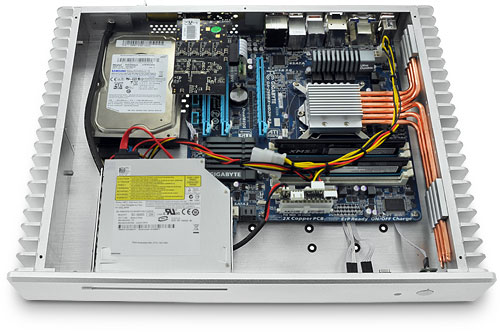 Despite its diminutive size, it packs a real punch - Intel’s 3rd Generation (Ivy Bridge) Core processors gives fantastic performance and low power consumption, allowing the machine to be cooled without any forced air whatsoever. The whole case acts as a processor heatsink, with heat being efficiently transferred from the CPU to the chassis via six copper heatpipes.

Here at Quiet PC we believe that customers have every right to expect the best possible performance from a brand new PC, so every system we build comes with our Clean Build™ promise. We install the operating system (if you order one), motherboard drivers, OS updates and Microsoft Security Essentials - that’s it. You won’t be pestered by pop-ups and nag screens and you can get on with using your new PC immediately without having to uninstall lots of junkware first. Your new machine will boot in super-quick time and will stay running quickly for many months and years to come.

If you like to watch Blu-ray films then we offer an optional Blu-ray player which is a slimline tray-loading model from LG. Although Windows includes Media Center, it does not have the built-in ability to play Blu-ray discs. To address this issue, we offer Blu-ray playback software from Arcsoft which tightly integrates with Windows Media Center to allow seamless playback and control of Blu-ray movies.

Our warranty runs for two years and is “collect and return” meaning that you don’t need to worry about getting the machine back to us - we will instruct our courier to collect it from you on a day of your choosing, then after we have checked and repaired it we will send it back to you by express courier at our expense. In addition, unlike many other PC suppliers, we have an “open-case” policy which means you are free to open the machine and perform your own minor modifications or upgrades without worrying that your warranty might be affected.

All three versions of Windows 7 include Windows Media Center which is a great way to watch and record terrestrial and/or satellite TV (in conjunction with a TV tuner card), as well as watching films, viewing photos and listening to music. Windows 8 does not include Media Center but it can be easily added to Windows 8 Pro for a nominal charge by requesting a product key on the Microsoft website. Adding Media Center to Windows 8 also gives you the ability to play DVD films. We recommend Windows 8 rather than Windows 7 because it has more features, faster performance and will be better future-proofed.

“I have been using laptop for software development for a long time, but had always found them overheating and slow, and also you can not upgrade them easily. A colleague of mine bought his development machine from Quiet PC and was very happy.

I decided to get myself a powerful machine for development which does not heat up on my lap and have option to upgrade it. Quiet PC delivers that flexibility and the machine build quality is great.

I had this just over a week so will be giving a full through test going forward.”