This next-generation fanless CPU cooler uses IcePipe technology - no fans, no dust, no noise. It is capable of silently cooling almost any modern processor with a TDP (thermal design power) output of up to 80 watts. 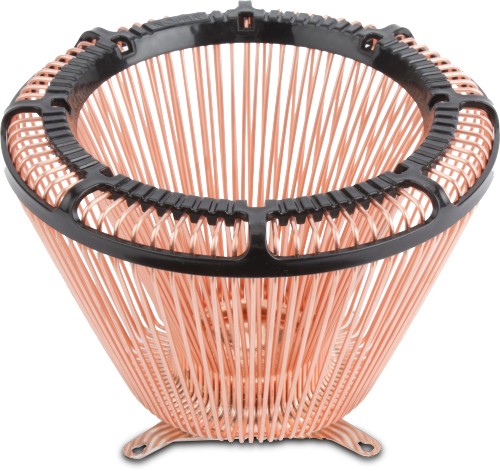 Probably the biggest technical advancement of the last decade in the field of PC cooling has been the invention of the thermal heatpipe. This has allowed a much greater efficiency of heatsink to be designed since heatpipes are good at moving heat from one location to another, both quickly and silently.

However, the performance of heatpipes has been limited by their internal design, which relies on cyclic evaporation and condensation of the water inside them. That is until now! The next generation heatpipe has arrived - it’s smaller, lighter, wickless and offers a massive improvement in performance. Its design is patented by Nofan Corporation of South Korea, and it’s called the IcePipe.

The holy grail of quiet computing is excellent cooling without resorting to the use of a fan. Rather than using forced airflow along with its associated problems (noise, dust-build up, bearing wear and limited lifespan), convection cooling is undoubtedly the technology of the future and because of the IcePipe, this is now a realistic possibility.

The exact details of how the IcePipe works are a trade secret, but in essence it operates by liquid capillary action. By making the pipe very small, natural perpetual circulation of the liquid inside takes place and heat is efficiently dissipated into the attached heatsink fins. Of course, like conventional heatpipes, the IcePipes are permanently sealed in the factory so that no liquid can ever escape.

Ideally, with the motherboard already seated in the case, measurements need to be taken to ensure that there is no obstruction within a 92mm radius of the centre of the CPU socket. Nofan have published a large list of all known compatible motherboards for the CR-80EH.

Important note for installation of CR-80EH - Do not over-tighten or unevenly tighten the four CPU cooler retention screws! We also highly recommend using a case that has ventilation holes/grill on the roof of the case to help the heat naturally dissipate.

Not bad but case ventilation is vital

My first impression was that the cooler felt a little lightweight and flimsy. Previously I’ve used Zalman coolers which were solid copper and felt high quality. I’ve read elsewhere that the Nofan is actually just copper plated. The finish is glossy and not like real copper. When I removed the plastic protection film from the base, it left behind a mark that I couldn’t clean off (and cleaning with an IPA-soaked tissue appeared to leave fine scratches on the surface). I would also have liked a backplate so that it was possible to tighten the screws firmly, rather rely on “don’t overtighten” advice and hope it’s secure without bending the motherboard. I’m pairing it with a 35W i5-10600T. (Previously I had a 65W Core 2 with Zalman cooler). However, the case is an old-style acoustically insulated one with little ventilation apart from the fan grille at the back. The power supply is at the top and has a low RPM fan. At idle, it seems fairly impressive, stabilising around 32°C (vs 37 in my old setup). It spikes up to around 45 under everyday tasks, then rapidly drops. The problem comes when I try a synthetic load across all 6 cores. It rapidly climbs right up to 85°C, at which point the processor throttles and it starts to drop. By extrapolation, I reckon it would level out at around 90. Interestingly, it makes little difference if I leave the side of the case off. I can’t test top ventilation in this case. My solution is to use a rear exhaust fan, which my motherboard allows me to configure so that it is off most of the time. It depends on the curve I program, but with the fan starting above 60°C, I can keep it below 70. The performance of the cooler means even without a fan, it takes a few minutes to reach excessive temperatures, so there is plenty of time for the fan to start. It may be that in a case with a top grille and natural through ventilation, the cooler would perform perfectly. To be fair they do say this is recommended. On the other hand, I only have a 35W processor. I’m reasonably happy with the semi-passive setup as 99% of the time there is no need for a fan. I’ll have to see how it fares in the summer. In summary, I felt the build quality could be better. Also, be prepared to use a case fan under load unless you have very good ventilation, and forget about high wattage CPUs. I read elsewhere that Nofan may have gone out of business, so I guess it’s a case of grab one while they are still in stock if you want to give fanless cooling a try.

Thanks for your review. We are happy to confirm that Nofan are still very much in business.

This heatsink in copper is very good.

I put this heat sink in a Mini-ITX motherboard ASROCK H470. I keep the retention guide to keep the nofan a little upper than the DDR4 RAM.

I recommend this product.

So, bottom line: if you want to go completely fanless, then, you have to go with T version of the CPU. Exactly the half - 40W of what is advertised. But, if you really want to cool a ~80W CPU, you will have to use case fans, which, in my view, completely defies the purpose.

I coupled this with an Intel Core i5-4690T (i.e. low TDP CPU). The only reason I didn’t give it 5* is that I assembled it first as it came. Afterwards, I discovered by a circuitous browsing route that it should have been installed in a particular orientation - there’s a nifty animation for its big brother cooler now on the QPC website, and they put me right about that. It would have been easier if the instructions mentioned the orientation to start with (the thing is square, so it’s easy to get it wrong); am I being unfair?

The PC is completely fanless, and it’s surprising quite how noisy a HDD (WD Caviar Blue) now seems… But the main thing is that the PC runs cool even when doing relatively computing-intensive things. So, as long as you have a low thermal rating CPU, this thing works fine. It’s quite pretty through the case vents too, if that’s your thing.

Hi Stephen - thanks for your detailed review, much appreciated! It’s great to hear you are enjoying your new IcePipe cooler. Sorry to hear about the installation confusion. Actually, unlike the CR-95C, the orientation of the CR-80EH isn’t important. We have added this information to the website to help other customers.