In late 2002 a couple of Japanese heatsink designers decided to go into business together and form a company called Scythe. The company’s initial focus was to distribute PC cooling products in Japan but in 2003 they manufactured their first product: the Kama-Kaze. Considering that this was their first attempt, the Kama-Kaze was a great success. It boasted features never before seen on any CPU cooler.

This success was a great foundation on which Scythe could build. They continued to bring innovative and unique new coolers to the market. If you are familiar with Scythe products then you will undoubtedly agree that one of the strangest aspect of their products is the names they are given: Kama-this and Kama-that, with the Kama-Kaze name being one of our personal favourites.

In 2004 Quiet PC formed a business relationship with Scythe, and ever since then the two companies have worked very closely together to help build Scythe’s brand in the UK. Considering that Scythe’s products are now available from virtually all online retailers it is great to see success in this area. But Quiet PC can’t take all the credit. As the saying goes, “you are only as good as the product you sell”. Luckily, Scythe’s products are in no way lacking in quality, so all the accolades need to go to them for producing great products, despite their unusual choice of names! 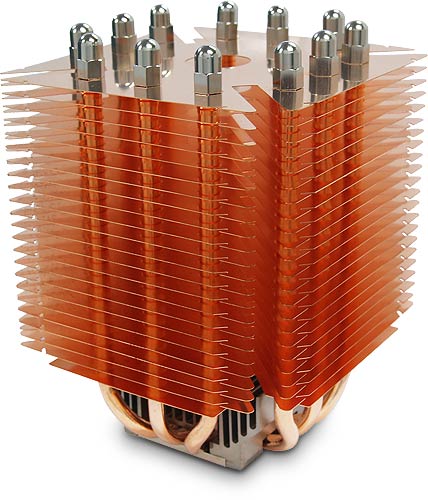 The year 2008 sees Scythe celebrating their fifth birthday and to mark the occasion they have decided to bring to the market a limited edition full copper Scythe Ninja. The Ninja was originally released back in 2005 and has proved to be Scythe’s most popular product. In fact it was Quiet PC’s best selling CPU cooler of 2007.

The all-copper Ninja-CU first made an appearance as a “concept cooler” back in 2006 at the annual IT exhibition, CeBIT in Hanover, Germany. Once the general public saw this new cooler with their own eyes, many enquiries were received asking for a release date. Scythe never intended to release the Ninja-CU because of its extreme weight and extreme price! As you may be aware, copper is over 50% more expensive than aluminium and is much heavier. To counteract this extra weight the Ninja-CU does not use pushpins to hold it onto socket 775 motherboards. You will be happy to know it is secured to the motherboard with the use of screws, so the mounting method is very secure.

From a cooling point of view, copper has much better thermal conductivity properties than aluminium; in fact it is almost twice as conductive. This means a copper-based cooler is able to cool a heat source much more quickly and dissipate the heat much more efficiently than an identical cooler manufactured in aluminium.

Because it is such a special cooler, the Ninja-CU is only going to be available for a limited period of time; specifically only for the first half of 2008. So get one while you can! All that is left to say is Happy Birthday Scythe!