Conveniently access your digital entertainment up to 20 feet away with one remote control. The remote handset is compatible with Microsoft Windows Media Center 2005 and Vista, and any Microsoft XBOX 360. The included receiver is not needed for use with XBOX 360 because the XBOX 360 has its own built in IR receiver. 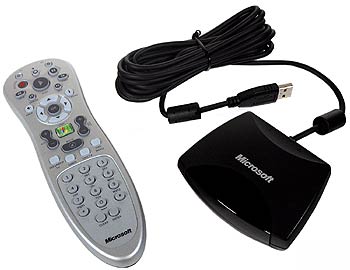 The on-screen menus are specially designed for remote control interaction.

Watch TV When and How You Want

Never miss a moment of your favourite programs - pause and rewind live TV, or record an entire TV episode, series, or category.*

Shuffle your entire music collection according to artist or genre. Tune in FM stations and even pause live radio.

Edit Your Digital Photos and Videos

Browse, zoom, pan, or print your pictures by using the remote.

Remote buttons glow in the dark for ease of use while watching TV in the dark.

The TV, VOL+ and VOL- buttons can be programmed by “learning” IR commands from other remote controls. See below, or on page 7 of the user manual (link on the top right) for instructions on how to do this.

By default the Vol+ and Vol- buttons on the remote will control your PC system volume, and the TV button has no command assigned until it “learns” one. Do not perform the following procedure in bright or natural light, or adjacent to light leaking from a bright plasma TV screen.

1. Place the remote head-to-head (2-3” apart) with the remote control from which it is learning

2. On the MCE remote press and hold the DVD MENU and OK buttons at the same time until the LED turns off (~2 sec). The remote is now in learning mode.

3. On the MCE remote, press and release the TV, Vol+ or Vol-, depending on which command you want it to learn. The MCE remote blinks once to confirm the selection.

4. On the remote control that is teaching the command, press and hold the button that you want the corresponding button on the MCE remote to learn.

5. The MCE remote LED flashes twice to confirm the selection. If the remote did not learn the command, the LED blinks quickly four times. To try again, repeat steps 1 through 4.

1. Press and hold the DVD MENU button and the LEFT navigation button at the same time until the MCE remote LED turns off.

2. Press the OK button. The MCE remote LED blinks twice to confirm that the buttons have been reset. The TV button will have no command assigned to it and the Vol+ and Vol- will adjust the PC system volume. If the default settings were not restored, the LED will blink quickly four times. To try again, repeat steps 1 and 2.

“All good and delivery prompt. Overall excellent. Due to go to the tropics and will want to see how performance is there.”