The Fansis FC-RPM01M is an inexpensive but very useful and effective way of controlling the speed of your 3-pin fan. Where a fan is making a lot of noise due to excessive airflow, this can be reduced in a controlled manner, until such point as the noise becomes minimal and the airflow still adequate. The silencing effect of reducing the speed of a fan even by a small amount can be very surprising! 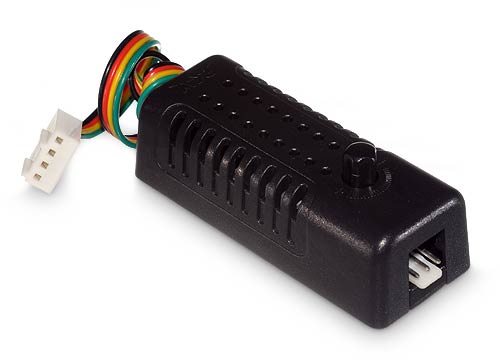 The RPM01M has a small rotary knob which can be turned in either direction, to raise or lower the fan speed. Once you are happy with the noise/airflow setting, just leave the knob set in its position and your installation is finished. The best approach is to start with the knob at its minimum speed setting ("silent mode”) and then increase the speed if more airflow is required.

Rather than using a simple rheostat (variable resistor) arrangement, the RPM01M uses a high quality variable voltage regulator circuit which will not wear out or run excessively hot. Installation is very easy as can be seen in the diagram below. You may be surprised how reducing the speed of a case fan (even slightly) can have a very large effect on noise output, with only a minimal effect on airflow.

You may notice that the FC-RPM01M is very similar in appearance to Zalman’s FAN MATE 2. Indeed, the products are virtually interchangeable, the main differences between them being that the Fansis model is capable of handling double the power drawn by a fan (up to 12 watts versus 6), and also the fact that it is compatible with 4-pin (PWM) as well as 3-pin fan headers on the motherboard. Finally, the Fansis FC-RPM01M offers an additional feature in that if the temperature is under 20°C, it will cut power to the fan completely since cooling would not be required at this temperature. When you first switch your PC on, this can save power, noise and wear until the temperature rises and then fan is automatically switched on by the RPM01M, to the speed you have set using its speed control knob.

“To my surprise, this product really works. Previously my wooden desk top was vibrating noisily in sympathy with my PC. These feet put a stop to that and now I only hear the relatively quiet whirr of the fans.