How Do I Choose a CPU Cooler?

I expect you are reading this because you are looking for a new, quieter CPU cooler but are not exactly sure which one is suitable for you. You may have looked at the range on offer on our website but have been overwhelmed by the choice available, if so, this is for you.

The original How to Choose a CPU Cooler article

I have tried to keep things as generic as possible so that this article will still be valid in 10 years time when all current CPU’s and socket types have become obsolete.

Before I start a note to Dell owners: At the time of writing, Dell use a lot of non-standard parts in their systems making it very difficult for you to actually replace the CPU cooler. The CPU socket may be non-standard as might be the fan connector. A lot of Dell’s simply have a fan fitted on the back or side of the case which blows air down through some ducting onto a heatsink fitted on the CPU. All you can do if your system is like this is to replace the fan where possible.

Now, in this the first part, I will tell you what you need to know before you even start looking for a new cooler.

Step 1 – How much heat does my CPU generate?

This is the first question you should be asking yourself because if you don’t know how much heat is generated then you don’t know if you need a small, medium or large CPU cooler.

If you are lucky and still have the CPU box, it may tell you on there how many watts of heat it generates. If not, you need to know the model number. For instance, at the moment the Intel Q6600 generates 95w of heat while most of the Intel Core 2 Duo’s only generate about 65w of heat. At the other extreme end of the scale, the AMD Athlon 64 X2 6400+ generates 125w of heat.

As you can see there are two versions, one is 105w and the newer version is only 95w. Also handy there is the maximum CPU temperature.

If you don’t know your CPU model number then you need to download a tool called CPU-Z from this website - http://www.cpuid.com

Running this will tell you the name of your processor, its code name, the revision and the socket type used on your motherboard, e.g. 775, AM2, Core I7 (LGA 1366). These are circled in red on the image below. 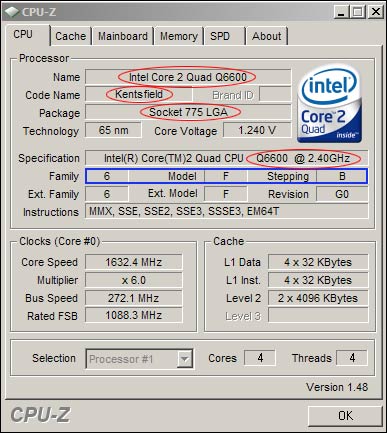 Also on there is the Family, Model and Stepping codes (marked in blue) - 6 F B for this particular processor. If you have found more than one version of your processor, this will help you identify exactly which version you have. In this case, it’s the 95w model.

The code name (Kentsfield in our case) is important too because the same processor can undergo an odd revision and appear more than one on that list of processor specifications as you have just seen with the Q6600. For example, the AMD Athlon 64 3000+ 1.8GHz appears at least twice, once as a socket 939 processor (code name Venice) and again as an AM2 processor (code name Orleans) and both have differing wattage and temperature specifications.

Here’s an example of the Venice core:

And again for the Orleans core:

Step 2 – What size CPU cooler do I need?

Well, CPU coolers come in all shapes and sizes and it’s safe to say that in general, the bigger the heatsink, the more efficient it is. If it is fitted with a fan, then the bigger the better. Large fans can rotate slowly while still moving a lot of air and being slower, they are usually much quieter.

If you only have a low wattage CPU, say 40w to 70w there really isn’t much point in going for the largest cooler available, you would be better going for the cheaper, small to medium sized CPU coolers.

If you have a CPU around or greater than 70w then you want to go for the bigger, more efficient CPU coolers.

Most if not all motherboard these days have a 4-pin CPU fan header on the motherboard. This is so you can set the temperature/speed ratio of the CPU cooler in the BIOS or through supplied utility software that comes with most motherboards.

For instance if the your maximum CPU temperature is 70 °C, you could say in the BIOS that the CPU fan can run on its lowest speed until it hits 65 °C and then turn up the speed to say medium or high when it gets too hot.

With his method, you do tend to notice the fan revving up and down so you do need to play about a bit with those temperature/speed ratio’s until you get the balance right.

Also, the amount of control you have over the fan speed may range from not much to quite a lot. Generally the more expensive the motherboard, the more control you have. On a good board, you can have the fan speed typically anywhere between 40% and 100% of full speed. On a cheaper board you may only get the option of slow, medium or fast!

Many people still prefer 3-pin fans because of the amount of control they offer. If you have a 3-pin fan it means that the fan spins at a constant speed or (by using a fan controller) you can change the speed of the fan. They even work on a 4-pin fan header. Usually, you want to turn the fan speed down as far as possible while still ensuring the fan is spinning fast enough to ensure it doesn’t overheat, no matter what you are doing.

A common misconception is that you have to keep your eye on the temperature and keep adjusting it at regular intervals. This isn’t true. However you do need to set the fan speed while all of the cores in your CPU are under full load. Search the net for such programs. Currently, CPU Burn-in is a popular example of this type of utility.

If you have say 4 cores on your processor, run 4 instances of the program and adjust the fan speed so that the CPU temperature doesn’t go over it maximum (but perhaps is 5 – 10 °C lower than maximum). That way no matter how much load your CPU is under, you know it can handle it. When you have done setting the fan, it will be running slower and quieter than it would have been at full speed.

The very first thing you need to do is know about your motherboard is your socket type (see step 1 if you are not sure). Popular socket types at the moment (Nov 2008) are 775, AM2 and the new, up and coming 1336. So as well as choosing a cooler you must also choose one that is compatible with your particular socket type.

Currently, a lot of CPU coolers are compatible with most of the popular socket types although there are some only support one socket type.

Beside the socket type, the layout of the motherboard can also determine which cooler’s will or won’t fit. Take this board for example: 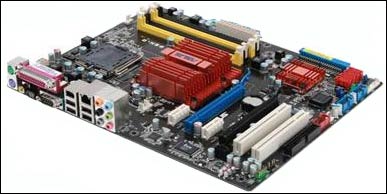 …if you have a motherboard like this, which is relatively un-cluttered around the CPU area, you can probably fit just about any compatible CPU cooler on there without a problem.

However, many motherboards these days have a lot of heat pipes surrounding the CPU, like this: 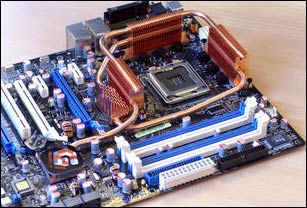 So how do you know what will fit or is most likely to fit?

Well it is surprising what you can get in that space. I myself have the motherboard pictured above and also a copper Ninja : 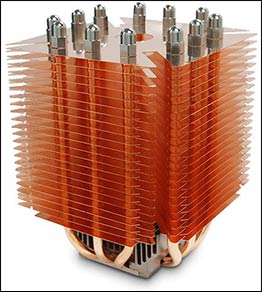 …which is big yet it still fits. Admittedly, clamping it down in the corners was a bit tricky but as always the result was well worth the effort!

Many cooler which appear quite large have fins which are just far enough away from the base of the cooler to clear the surrounding heat pipes. Some manufacturers even have a list of popular compatible motherboards on their website for each of their CPU coolers although they are few and far between and don’t get updated regularly.

Step 5 – Being reasonably sure the cooler will fit.

You may get to a point where you want a certain CPU cooler but looking at your motherboard, it might not be obvious if a cooler will fit and you would rather get one that fit’s first time around so you are not messing around sending it back and getting another more likely cooler. So what do you do?

Well, if the area around the CPU is pretty cluttered with heat pipes then consider a cooler design which stands proud of the motherboard with a narrow base, ones such as these:

Step 6 – Ensuring it fits in your case

One common reason I get CPU coolers returned is because they were too big to fit in a case. Some of the images on our website can be deceiving, some cooler are in fact pretty tall (15 cm plus!) so it’s always a good idea to take a few measurements inside the case and compare those to the measurements listed on the website before you place an order.

Well if all else fails and you are still unsure what to get, feel free to email QuietPC technical support with as much information as possible about your system (see step 2) motherboard make/model, CPU make model and if possible, send a clear picture showing the inside of your case. That way I can gauge the space you have in there for a replacement CPU cooler and so recommend accordingly.

Finally, what if it doesn’t fit when it arrives?

We all make mistakes but not to worry, at QuietPC we won’t penalise you for that. If your cooler doesn’t fit then by all means let us know and we will issue you RMA details so you can return it for a refund and we can look at other alternatives.