The Jonsbo W2 is aimed at customers who want to build a sophisticated high-end system based on a full-size ATX or even XL-ATX motherboard. One of the main features of the W2 is its timeless design line with an attractive, classic exterior in aluminium. 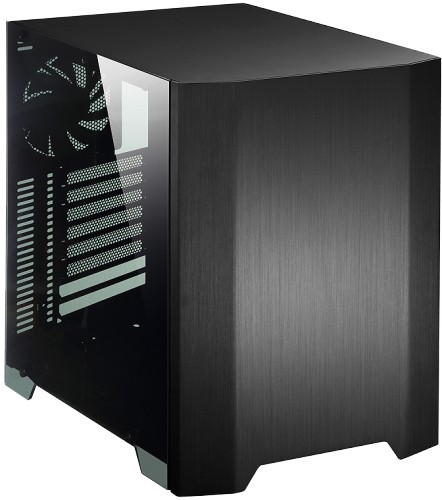 The front of the W2 has been deliberately kept clean and simple giving it a straightforward elegant design. The power and reset buttons, (as well as the I/O panel) can be found on the right hand side of the case in order to preserve the unobtrusive design. The main chassis of the W2 is made of 1.0mm thick steel and affords the case excellent stability whilst the front, sides and top cover are made of brushed 2.0mm thick aluminium.

It’s not immediately noticeable but at the rear of the case is space to mount a 5.25” device, which is geared towards users who require an optical drive for very occasional use. This ensures that the available space is used optimally and aesthetics are not compromised. Internally the system can accommodate one of the following combinations of drives; three 2.5” HDD/SSDs and three 3.5” HDDs or one 5.25” optical drive and two 3.5” HDDs. Eight PCI slots are available for the installation of expansion cards.

The real strength of the W2 is revealed when the side panels are removed: the W2 offers a particularly innovative internal structure which has been divided into two vertically separate thermal zones. The first zone houses the motherboard as well as an efficient ventilation system. The second zone, behind the motherboard tray, offers space for the power supply, hard drives, and (if required) an optical drive which is accessed at the rear of the case.

The motherboard is installed in the first thermal zone of the W2 which is located on the left side (as seen from the front). It is compatible with XL-ATX, ATX, Micro-ATX or Mini-ITX motherboards. A CPU cooler with a maximum height of 163mm and VGA cards with a length of up to 295mm are also compatible. If the lower 140mm fan is removed from the front of the case, users can fit video cards of up to 320mm in length.

The second zone, accessible from the right side (as seen from the front), is ideally suited for the installation of hard drives and a power supply unit. The power supply is installed at the lower rear of the case where air vents in the right side allow for cool air to be sucked in from the outside of the case and then pushed out of the back of the PSU. Rubberised cable guides in the motherboard tray allow users to guide any cables through to the first chamber of the case.

The installation of optical and hard drives is also done in the right thermal zone of the case. In addition to a dedicated SSD cage for three 2.5” drives, the W2 offers another drive-holder for either two 3.5” HDDs or a 3.5” drive and a 5.25” optical drive. Another 3.5” mass storage device can be installed in the other thermal zone at the bottom of the case if no fan is mounted there. The drives use decoupled mounting screws to reduce vibrations which in turn helps to reduce the noise they omit.

The ventilation system of the W2 is designed for maximum performance. In the first chamber of the case two 140mm fans are pre-installed. One 120mm fan is located at the rear. Two additional 120mm fans can be mounted at the bottom of the chamber. In the second chamber, one 80 mm fan can be mounted behind the front cover in order to provide cooling for the hard drives. Dust filters in the front and under the bottom of the case prevent dust from entering the interior.

Another main feature of the W2 is the possibility to install radiators for a water cooling system in the first chamber without much effort. Behind the front panel a 280mm radiator can be accommodated, which can be cooled perfectly with the two pre-installed 140mm fans. Depending on the motherboard used, it is also possible to install a 240 mm radiator with corresponding fans at the bottom of the case. Please note; that the maximum length of the video card(s) is reduced when installing a radiator at the front.

For simplified installation of external water cooling components, the W2 has two rubber hose outlets in the rear panel.

We haven't received any reviews of this product yet.

Nice case, but not without flaw

First of all I really like the look and shape of the case. It’s more cube like shape gives it a shorter but wider appearance than a standard tower. The brushed metal finish is also quite pleasing.

Internally there is loads of space for your power supply and main board, along with add in cards. However the cable routing holes get slightly covered by over size boards making passing the larger power plugs through the gaps occasionally quite tricky. I was a little annoyed when I’d mounted my motherboard and found one of the very top routing holes unusable for the 8pin CPU power cable so ended up using a slightly less elegant route. I’d recommend running cables before screwing down the motherboard to help in these situations.

Mounting hard drives and SSD’s is also simple enough, but I’m sure there is a more elegant solution than the mounting cages included. I feel like SSDs, at least, could be installed with a less tool heavy mechanism for easier drive swapping. The 3.5” drive mounting cage is also less than ideal. It forces you to make a decision between optical and hard drives, and then limits your 3.5” drive options. I think an alternate cage could be provided for additional hard drive mounts.

The case is also fairly quiet and provides excellent airflow with it’s split compartment design and super silent pre mounted fans. However it needs additional noise dampening material to bring it down to the levels I had in my old noise dampened Antec P180.

It might sound like I dislike the case, but I don’t. These are really just minor quibbles with a case that fits my requirements very nicely and packages my PC into a more compact and lighter box, with better airflow and plenty adequate noise performance.

We haven't received any reviews of this product yet.

A nicely built compact ATX case without too many compromises

The included fans were OK in terms of noise but I’ve swapped them out for better items and added an NZXT Grid+ V2 to control all fans speeds based on CPU / GPU temperature.

I’ve also added sound deadening (the heavy self-adhesive rubber sheet type) to reduce vibration / reverberation, lining the detachable front panel, sides and ceiling which has really helped - though I only really needed to do this as the case sits within a wooden-ish (chipboard / MDF and veneer) bookcase that in itself really amplifies any vibration generated by the PC.

The 2 case fans in the front don’t add that much to the cooling (especially the top one) - I suspect the case would be cooler if the front panel were open at both the top and bottom of the case.

No case is perfect... But this one is close

I waited 3 months for this case to finally become available and it was well worth the wait. I transferred my current mATX build from a Corsair Air 240 to this case. I may not be taking advantage of options the W2 has over the 240, but I will eventually. The W2 is only 75mm taller than the 240 yet it can hold even XL-ATX boards while the 240 is maxed out at mATX. The W2 can hold 140mm fans, has more fan mounting locations than the 240, can hold a 5.25” drive, and has more clearance for CPU coolers and GPU. This is why I choose this case. I also had some concerns with airflow, as I am air cooled. After doing some searching, I was seeing results from reviewers that the W2 just could not cool as well as the competitors and the Air 240 actually cooled the best in most reviews. I transferred my entire system (fans included to replace the Jonsbo fans) and my temps did not change at all! I am beyond pleased with the case and it capabilities.

-The power LED is brighter than the sun.. seriously.

-As mentioned in another review, the routing holes for the 8 pin CPU power cable are not usable (for the 8 pin at least, smaller cables can still fit) once the board is mounted.

-The drive cages can be a pain and tool less cages are much better.

-The top panel screws on and the placement of the screws are difficult to get to and cannot be accessed with the intake and exhaust fans installed.

These nitpicks are simply just annoyances that I believe do not takeaway from the case or be a reason to avoid this case.

Overall, I absolutely love this case and I am so happy I was able to get one. I can’t wait till I need to upgrade so I can get a full ATX board in the case.

And amazing service from Quiet PC! Emailed me once the case was in stock, I ordered it that day and it arrived only 3 days later coming all the way to the US!

“The service of Quiet PC is quite simply outstanding.

The technical support of this quality is so unusual today and a pleasure to use.

Both Pre and Post sales service is beyond reproach.”