The CNPS9900-MAX is made from composite heatpipes and provides multi-socket cooling.

Introducing Zalman’s latest CPU cooler: the CNPS9900-MAX. Featuring composite heatpipes and a striking 135mm blue LED fan, which when combined, result in a cooler capable of providing 300 watts of cooling! 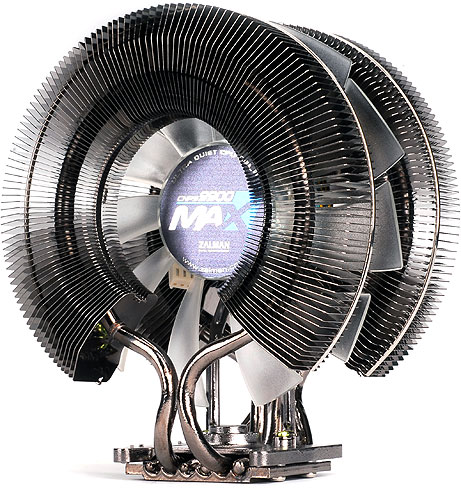 The incorporated 135mm blue LED PWM fan provides more than adequate airflow to cool even the most demanding CPU, with noise levels from as little as 18 dBA. The cooler is supplied with a resistor cable (RC7P) which will cap the maximum speed of the fan from 1700RPM to 1500RPM, reducing noise levels even further. The PWM (Pulse Width Modulation) fan automatically adjusts fan speed according to CPU temperature, while the RC7P provides the option of reducing the input voltage for overall reduction of fan speed and noise.

Intel and AMD’s latest processors pose no problem - the cooler is compatible with all current sockets including LGA1366.

The entire copper heatsink of the CNPS9900-MAX is ‘Black-Pearl’ nickel plated for long-term corrosion resistance, while the deep Black-Pearl tone along with the high intensity Blue LEDs reinforce its excellent aesthetics. Two large heatsinks are attached to the base of the cooler by six nickel plated 6mm heatpipes to effectively transfer the heat from the CPU.

this is by far one of the better cpu heatsinks I’ve ever found. aesthetically pleasing to the eye with just enough blue light from the embedded led in the fan, whilst quietly spinning, the 135mm fan has heaps of power and keeps my cpu lower than 30°, even on many hot days throughout summer, yet i am still to see the cpu temp exceed 35°.

I bought two of these to replace a pair of Scythe Mugens I had cooling some AMD 905e processors. The original purpose was to allow for the use of all four memory slots in the motherboards but I was pleasantly surprised to find that they also were much quieter.

I have some MySql jobs that stretch my machines, often using all four processors at 100% for a couple of days at a time. With the Scythe coolers the machines would get hot and bit noisier after 24 hours of processing but these coolers cope much better and my computers are still cool and quiet at the end of a day with the processors running flat out.

I purchased some cables for use in my PC based on the description on the Quiet PC's website, which turned out to be a male connector instead of a female one (Quiet PC did not claim it was female, I just believed it was based on the general description). I was contacted by their customer service and asked if everything was to my satisfaction, to which I could only reply that as the product was not what I needed, I couldn't evaluate it. I have today received a full credit from Quiet PC (Didn't ask for it) and they have changed the description on the website for the product. First class customer service. Gold star from me.
(Review via Trustpilot)