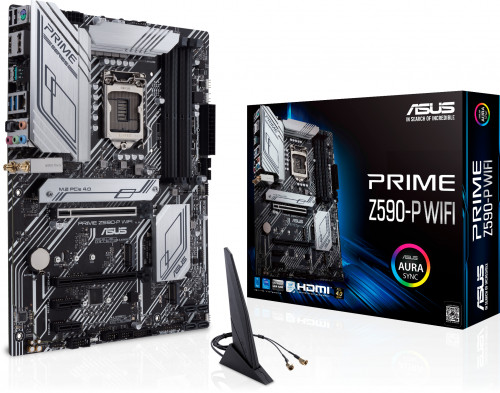 Prime Z590-P offers a total of three M.2 slots, with one slot supporting data-transfer speeds of up to 64 Gbps via PCI Express 4.0 **, enabling quicker boot-up and app load times with OS or application drives.

Cool to the Core

Prime Z590 series is engineered with multiple onboard heatsinks and an array of hybrid fan headers to ensure your rig stays cool and stable under intense workloads.

Build on a Solid Foundation

Prime Z590 series is built to handle the additional cores and increased bandwidth of 11th Generation Intel Core processors. ASUS Z590 motherboards provide all the fundamentals to boost daily productivity, so your system will be ready for action with stable power, intuitive cooling and flexible transfer options.

Tune It Your Way

Comprehensive controls form the foundation of the ASUS Prime series. The Prime Z590 motherboard packs flexible tools to tune every aspect of your system, enabling performance tweaks to perfectly match the way you work, to maximise productivity.

An M.2 heatsink takes care of the two M.2 slots, warding off throttling that can occur with M.2 storage during sustained transfers. The heatsink is held in place by captive screws and can be moved to other M.2 slot.

PLEASE NOTE: To take full advantage of the features the 500 series motherboards has, then an 11th Gen CPU is recommended. If opting for a 10th Gen CPU the PCIe 4.0 slot reverts to 3.0, the PCIe 4.0 M.2 port will be completely disabled and the HDMI 2.0 port(s) revert to HDMI 1.4.