The ROG Strix X370-F Gaming motherboard from ASUS offer everything you would expect from a high-end motherboard expect for the high-end price! 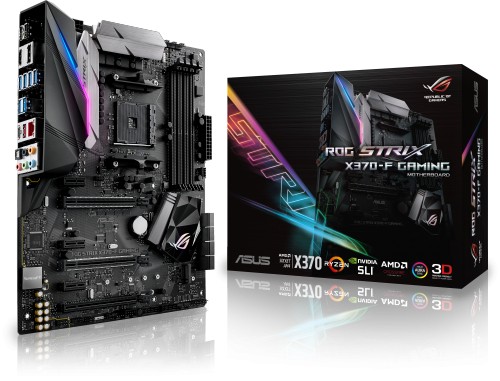 Create your own custom LED lighting effects with the intuitive Aura software. Cast a stunning multi-colour glow across your build with the powerful RGB LEDs built in to ROG Strix X370-F Gaming, or attach separate RGB strips using the two onboard 4-pin headers. You can even use both at the same time and enjoy perfect lighting synchronisation. Fire up Aura and enjoy the creative freedom of nine different lighting themes.

ROG Strix’s SupremeFX audio technology has levelled up, delivering an exceptional 113dB signal-to-noise ratio on the line-in connection for best-ever recording quality — and 120dB on line-out for crystal-clear sound! Asus have also added a low-dropout regulator for cleaner power delivery to the SupremeFX S1220A codec, plus Texas Instruments RC4580 and OPA1688 op-amps for high gain with low distortion. It all adds up to audio that envelops you as never before! 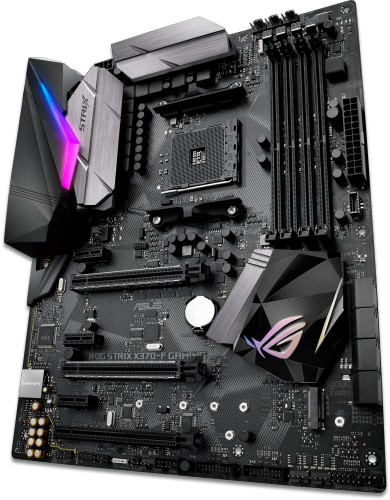 A dedicated base-clock generator designed for AM4 processors allows overclocked base clock frequencies up to or beyond 158MHz. This custom solution works in tandem with the ASUS TurboV Processing Unit (TPU) to enhance voltage and base-clock overclocking control — providing an exciting new way to boost performance to extreme heights.

You don’t need to be an expert to max out gaming performance on your ROG Strix X370-F Gaming build — because 5-Way Optimisation sorts all the complex settings with a click, for instant, highly-controllable performance boosts! ASUS’ exclusive technology dynamically optimises essential aspects of the system based on real-time use, so you get superb CPU performance, everyday energy savings, ultra-stable digital power, cool and quiet fans and even networking and audio settings that are tailored for the apps that you are using. In short, 5-Way Optimisation ensures that your PC is perfect for gaming, entertainment, productivity or just about anything else!

Play quieter and cooler with advanced fan and water-pump controls for the ultimate in undisturbed gaming. With onboard thermal sensors and hardware-level 4-pin/3-pin PWM/DC mode detection, Fan Xpert 4 makes sure every fan achieves the best balance of high cooling performance and low noise - so you enjoy all the performance you demand with none of the racket!

With x4 PCI Express 3.0/2.0 bandwidth, M.2 supports up to 32Gbps data-transfer speeds. It is the perfect choice for an operating system or application drive, making your whole PC and professional apps work as fast as possible.

With one USB 3.1 Type-A port and one reversible USB 3.1 Type-C port, you’ll experience data-transfer speeds of up to 10Gbps — twice as fast USB 3.0. USB 3.1 is also completely backward-compatible with existing USB devices, so you’ll be set for breakneck USB 3.1 speeds with every connection. And as an added bonus, ASUS-exclusive USB 3.1 Boost technology automatically accelerates USB 3.1 performance even further.

Absolutely delighted with this card arrived the next day and was really easy to install on my PC. , after installing the latest driver’s I opted to run it with Media Portal 2, choosing the simple setup and following their excellent instructions It was really easy to set up using Astra 2E) at 28.2°E which is perfect for Freesat UK. I then had to wait for ages but ending up with nearly 800 channels., added a new folder to keep only my favourites.

I’m really pleased with Quiet PC for their excellent service and advice together with a speedy delivery, as well as the 6902. Highly recommended”