Republic of Gamers (ROG) has delivered exemplary design and performance to thrill the world’s best gamers and PC enthusiasts. Now, it’s time for gamers and enthusiasts to push the limits with the feature packed ROG Maximus IX Code motherboard.

Born from the Formula, the Maximus IX Code gives gamers the aesthetic appeal of Aura Sync lighting, the convenience of onboard Wi-Fi, and the reliability of long-lasting components. It’s christened Code to echo the defining layer of ROG Armor that protects and streamlines the board. Code has roots in codex, a Latin term describing the precursor to modern books that became popular due to its unique and durable cover. The Maximus IX Code seeks to set a new standard in motherboard design by making ROG Armor more accessible to gamers. 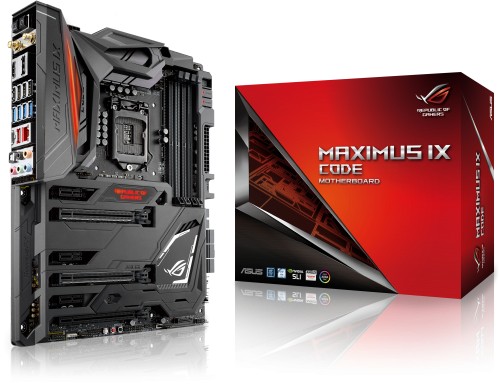 Customise your own favorite LED effects with Aura, the intuitive lighting-control software, to cast a stunning multi-colour glow across your build via the ROG Maximus IX Code’s brilliant built-in RGB LEDs or attached RGB strips via the two onboard 4-pin headers ─ all lights will perform in perfect synchronisation! Fire up Aura and enjoy the creative freedom of nine different lighting schemes.

EXQUISITE AUDIO, INSIDE AND OUT

ROG’s awesome SupremeFX audio technology has levelled up, delivering an exceptional 113dB signal-to-noise ratio on the line-in connection — and that means ASUS’ best-ever recording quality! They have also added a low-dropout regulator for cleaner power delivery to the SupremeFX S1220 codec, an ESS Sabre Hi-Fi ES9023P digital-to-analog converter for superior front-panel output and a Texas Instruments RC4850 op-amp for high gain with low distortion — which all adds up to audio that envelops you as never before. 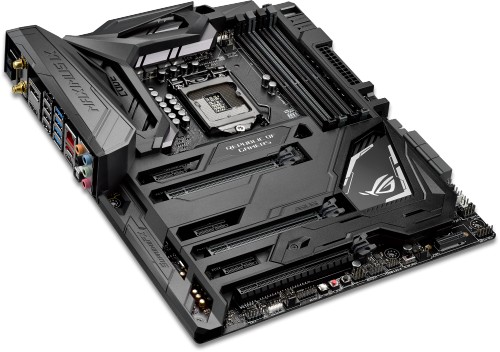 A dedicated base-clock generator designed for 7th Generation Intel processors allows overclocked base clock frequencies up to or beyond 425 MHz. This custom solution works in tandem with the ASUS TurboV Processing Unit (TPU) to enhance voltage and base-clock overclocking control — providing an exciting new way to boost performance to extreme heights.

With support for DDR4 memory you’re able to drive memory frequencies to 4133 MHz (and beyond when overclocked)! ASUS-exclusive T-Topology circuit design plus OC Socket provides superb memory-overclocking capability to unleash the full power of DDR4 by minimising coupling noise and signal reflection. With innovative equidistant memory channels, it delivers the most balanced control and powerful overclocking compatibility. ASUS works with almost every DDR4 memory vendor to ensure the best compatibility.

Play quieter and cooler with advanced fan and water-pump controls for the ultimate in undisturbed gaming. With onboard thermal sensors and hardware-level 4-pin/3-pin PWM/DC mode detection, Fan Xpert 4 makes sure every fan achieves the best balance of cooling performance and low noise ─ so you enjoy all the performance you demand with none of the racket!

USB-C is the latest USB connector technology — and ROG Maximus IX Code lets you put it right where you need it! With a ASM 2142 USB 3.1 controller running at PCIe 3.0 x2 and featuring an onboard USB 3.1 front-panel connector, you can now achieve the highest data transferring speeds possible - easily. 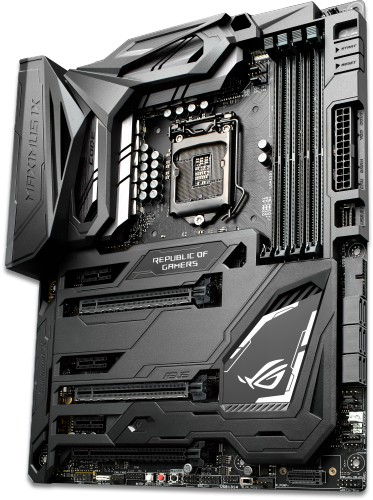 ROG Maximus IX Code has next-level 802.11ac Wi-Fi with 2x2 dual-band 2.4/5GHz antennas for up to 867 Mbps transfer speeds — and the very latest Multi-User Multiple In Multiple Out (MU-MIMO) technology to ensure that every connected user experiences the best wireless and online speeds!

ROG Maximus IX Code isn’t just VR Ready — it goes way beyond! The ASUS Beyond VR Ready marque means that Maximus IX Code has been tested with loads of class-leading components to ensure that your productivity, gaming and entertainment needs are tuned for maximum performance after you’ve taken off the headset. ASUS ROG Beyond VR Ready opens up a new way to configure and build your dream system with total confidence.

“I configured and paid for my first PC but unfortunately I made a mistake with the components meaning there was too much fan noise for my taste. I spoke to customer services and they let me return and exchange for a more suitable build without any of the usual reluctance you expect. The advisors and customer agents are all first class and I will definitely use them for all my future business. The desktop I got is gorgeous, sleek and most importantly for me, completely silent.”