ROG Strix B250 motherboards continue the proud legacy of the Pro Gaming series with acclaimed ROG innovations. ROG Strix B250I Gaming motherboards combine a compact, mini-ITX form-factor with bold aesthetics, premier performance and incredible audio to deliver gaming experiences with punch and unrivalled style. Support for the latest Intel processors and technologies, plus exclusive ROG innovations — such as the revolutionary double-decker heat sink — take performance to the next level to give you the edge against opponents. ROG Strix B250I charges every movement of every game with thrilling energy and equips you with epic speed and agility. Join the Republic with ROG Strix B250I Gaming and dominate your game! 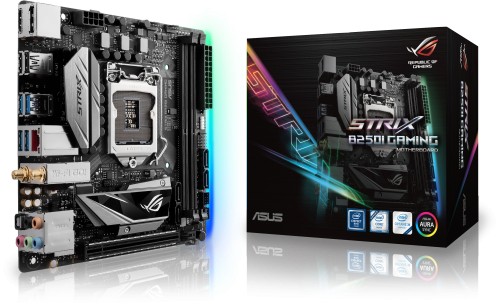 ROG Strix B250I Gaming has an innovative double-decker heatsink design that allows the M.2 SSD to be stacked atop of the PCH heat sink, which is then topped off with an additional metal heatsink for the M.2 drive. The two heatsinks are thermally isolated to prevent the PCH and M.2 from affecting each other. The double decker design not only cleverly maximises the board space on mini ITX board, but also dramatically improves heat dissipation, cooling the M.2 SSD by up to 20°C for better stability and enhanced gaming performance while featuring a stylish angular design to enhance the look of ROG Strix B250I Gaming builds.

ROG Strix SupremeFX audio technology has levelled up, delivering an exceptional 113dB signal-to-noise ratio on the line-in connection for best-ever recording quality — and 120dB on line-out for crystal-clear sound! ASUS have also added a low-dropout regulator for cleaner power delivery to the SupremeFX S1220A codec, plus Texas Instruments RC4580 and OPA1688 op-amps for high gain with low distortion. It all adds up to audio that envelops you like never before!

Play quieter and cooler with advanced fan and water-pump controls for the ultimate in undisturbed gaming. With onboard thermal sensors and hardware-level 4-pin/3-pin PWM/DC mode detection, Fan Xpert 4 Core makes sure every fan achieves the best balance of high cooling performance and low noise - so you enjoy all the performance you demand with none of the racket!

Onboard Wi-Fi and Bluetooth

ROG Strix B250I Gaming has next-level 802.11ac Wi-Fi with 2x2 dual-band 2.4/5GHz antennas for up to 867Mbps transfer speeds — and the very latest Multi-User MIMO (MU-MIMO) technology to ensure that every connected user experiences the best wireless and online speeds! 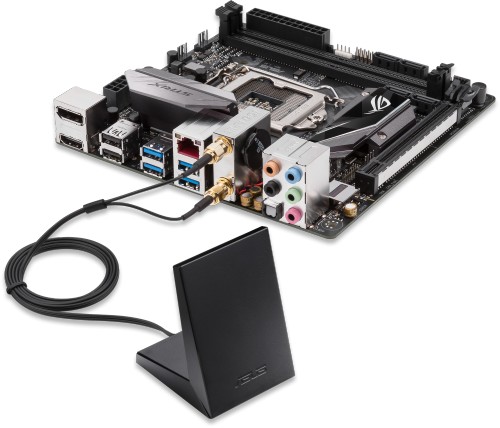