The fan motor for the DustPROOF range of virtually silent fans is extremely quiet. The AcoustiFan™ DustPROOF series use the highest quality double-ball bearings available for reliability, use-anywhere inside a PC for extra long life expectancy (upgrade your PC and take these fans with you!). One of the unique features of these PC fans is that the motor has been completely sealed from the outside environment. This prevents dust entering the motor and also reduces the amount of noise perceived to be coming from the bearings within the motor. 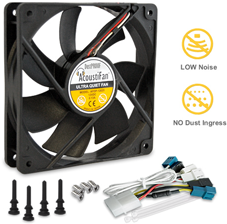 Each DustPROOF™ quiet fan is also supplied with a unique 3-speed fan cable which offers maximum flexibility (3-pin or 4-pin power connectors), along with the ability to select a fan speed suitable for your PC and noise sensitivity. However, if you opt for the lowest fan speed, (virtually silent at 5VDC), be certain to design the airflow through your PC system carefully and monitor system and component temperatures. Acousti have even included four handy cable ties with each DustPROOF™ fan!

The DustPROOF™ quiet fans also incorporate an Auto Start safety feature. This feature is built into the fan’s PCB and automatically restarts the fan after the release of any obstacle which has prevented the blades from spinning.

To convert airflow in cubic feet per minute (CFM) to cubic metres per hour (m³/h), multiply the CFM figure by 1.7.

“Ordered on Wednesday afternoon and the parcel arrived on Thursday morning.”